In the fall of 2017, the student Habit Boosters Action Team created a new video to spread the word about the Buddy Bench at Westgate.  Check it out!

Last year, a fifth grade student named Chris brought the idea of a Buddy Bench to the Westgate Student Lighthouse Team, and the team chose this as their community service project for the year.  Students worked with organizations such as the Westgate PTA and the American Legion to secure funding for the bench, and also worked hard to create recycled pop bottle art that they sold at last year’s Ice Cream Social in an effort to raise money for not one, but two buddy benches at Westgate.

The benches arrived and were installed at the beginning of the 2016-17 school year, and this year’s Environment/Habit Boosters Action Team has taken the lead to promote the Buddy Bench, and explain its purpose to others at Westgate.  Take a few moments to watch the original video they recently created during their recess time! 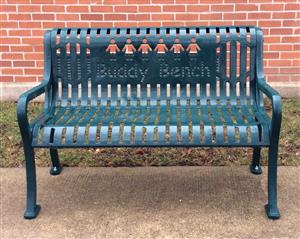