New culture is a school bus ride away

Arlington Heights, IL – Students in Mark Noltner’s fourth grade class hopped on a bus at Dryden Elementary School for a four-mile drive to experience what most need to travel across the Pacific for.

This group of students was visiting their friends at the Chicago Futabakai Japanese School, completing the second of a two-part culture exchange kicked off the previous week in Noltner’s class.

“This is my element,” Noltner said near the end of the day when his class hosted the exchange. “I love working with different cultures and exposing my students to that first hand experience.”

The message wasn’t lost on Noltner’s students, as many were captivated as they were guided through a traditional Japanese school day learning calligraphy, science, geography, physical education and the culture of Japanese life through toys and communication activities.

Little differences like the lack of snack time or the types of activities in P.E. fascinated the Dryden students. The biggest awe, however, came during the science lesson. Students were set up in groups and learned, first hand, how metal expands when it is warmed.

“That’s what I tried to prepare them for all week,” Noltner said. “I asked them, ‘how are we going to communicate with our new friends?’ We found some fun ways, I think.”

The two-day culture exchange opened the eyes of both groups to the idea that there is another way to do many things outside of the norm.

“There is a different way to be in school and do things differently than I’m used to.” Nassis said. 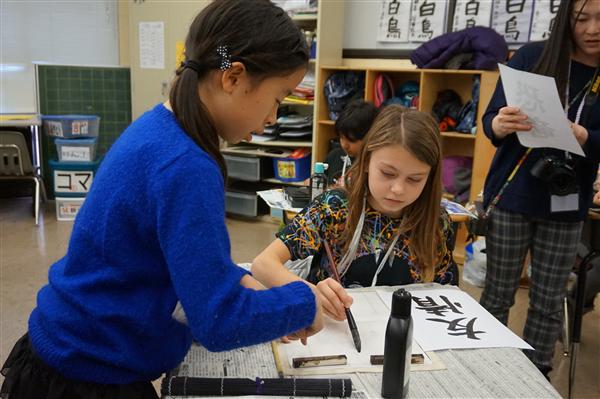