Arlington Heights, IL – One hundred and twenty-eight men’s and women’s college basketball teams will begin their dancing this week as they enter their March Madness Tournaments, but at Olive-Mary Stitt, the dancing has already begun.

Last week, every first grader at OMS gathered in the commons to learn a dance native to Japan. These Owls are in the middle of their Cultural Comparison unit where they focus on one culture and learn about it every day for three weeks.

“We took a flight to Japan at the beginning of the unit and we have been traveling all over the country, learning about different traditions, clothing, food, government and more,” first grade teacher Carol Vittore said.

On this day, Vittore and her team invited Golden Apple Award winner, and District 25 retired teacher, Sharon Takahashi, to show and tell about the clothing and teach a Japanese dance called Tanko Bushi.

Students were given time on their own to research information about clothing in Japanese culture so they could come prepared with information for what Takahashi was about to show them. Students didn’t disappoint, as they fired questions and pieces of knowledge at the Golden Apple Award winner.

“They wear the kimono for special occasions,” one student said.

“Where is the obi?” another wondered.

Takahashi demonstrated how to dress in a traditional Japanese kimono using one of the Olive teachers as an aid. The students loved that part, but the surprise came when Takahashi invited some first graders to wear some Japanese clothing as a demonstration.

The students then all stood up and gathered in a circle to learn the Japanese dance. As Olive-Mary Stitt students travel through Japan over the next week and a half, they look forward to their final day, when they get to go to Disneyland in Tokyo. 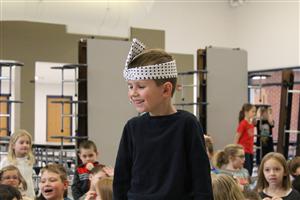