Mix It Up Lunch at South Gets Students Jumping

Today, eighth graders who joined a committee called Making a Difference (MAD) Cardinals, embraced the national movement, Mix it Up at Lunch Day. In order to assure the South Spirit is left in good hands, and the sixth graders were able to get to know each other on a level playing field at lunch. 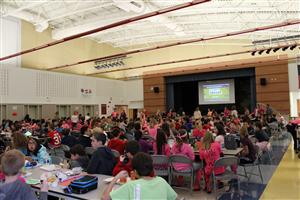 “We participated in this event last year as seventh graders,” eighth grade MAD member Corinne Krause said. “We felt that it works better for sixth graders because they don’t have the social groups cemented yet.”

The MAD team spent weeks preparing for this event, acquiring a full list of sixth grade students at South, and randomly forming a seating chart for the entire grade to use during this lunch period. The MAD Cardinals then put together cards full of questions to be asked and discussed amongst the sixth graders at each table.

“We wanted to force the sixth graders into answering a question. So, we asked questions that had a clear answer,” Anja Benz said. “We asked questions like, ‘Cubs or White Sox’ or ‘Marvel or DC [Comics]?’ We learned to ask questions like this because at last year’s lunch, we didn’t interact as much.”

After the students were given a few minutes to discuss those questions, the trivia game began. Using an online program called Kahoot! the MAD team developed a timed “Did You Know” trivia game centered around teachers in the school to be answered electronically by each table that was supplied with an iPad.

Students leapt from their seats, screaming the answers to the iPad-holder for questions like, “Which teacher was a nanny in England,” or, “Who twirled a baton in the Miss Illinois Teen competition?”

As tables changed places in the trivia standings and students energetically continued to answer each question, the MAD Cardinals stood by to see their plan come to life. The sixth grade Cardinals were gelling right before everyone’s eyes.

“We wanted to build comradery within our school,” Benz said. “I think we did that today.”