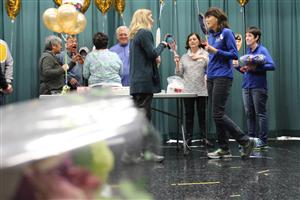 Golemo is one of the supervisors for this lunch period, and she walked directly into a surprise.

Once Thomas Principal, Brian Kaye, took the microphone, and introduced Chris Fahnoe, who is a member of the Arlington Heights Special Events Commission, everyone, even Golemo, knew what was up.

“This individual has been described as having a ‘Heart of Gold’ that elevates Thomas and the village to a level of caring that is unparalleled,” Fahnoe said, primed to introduce Golemo to the crowd. “It is my absolute pleasure to introduce Carol Golemo, recipient of an Arlington Heights Hearts of Gold award.”

Golemo tried to hide behind the lunchroom wall, but with her favorite singer, Neil Diamond, playing over the speakers, she reluctantly came out and accepted the award. She never thought it possible to be recognized for her countless service hours to the community and various causes. In fact, that idea never crossed her mind.

“It’s nice to be recognized, even though I don’t want to be,” Golemo said. “I do a lot of things because I enjoy doing them.”

Golemo, who was described by friends at the unveiling as having a servant’s heart, accepted the award but immediately climbed on stage because she couldn’t wait to help hand out pieces of the cake that was bought for her. 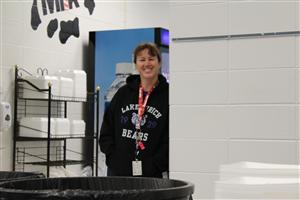 “Carol [Galemo] deserves this because she doesn’t think she deserves it,” fellow activist, Mary Beth Beiersdorf said. “She’s the most giving and unselfish person I’ve ever met in my life.”

Golemo’s impact in the Arlington Heights community is felt through many volunteer organizations, fundraising events, and perhaps most closely, with her students at Thomas Middle School.

Students who couldn’t attend this presentation asked to be able to Skype in to see a role model they look up to, honored.

The submission process began in October when Golemo’s fellow teaching team nominated her for this award. It was easy for these Thomas teachers to ask for and receive countless letters of recommendation on Golemo’s behalf and to uncover many pictures showing Golemo’s dedication to her various involvements in the community.

Twelve nominees are chosen to represent twelve different categories in the Hearts of Gold awards, and Golemo’s nomination and selection came in the Volunteer category.

Golemo has always been one to serve others. She joined the army in the late 1980’s and served for 25 years. She taught for many years, before landing at Thomas Middle School in 2000 as the P.E. teacher.

In August of 2005, Galemo’s mother passed away due to a rare disease. Galemo decided to even further dedicate her time and effort to raising awareness and funds for research for that disease. That spread to other causes and, eventually, volunteering, raising awareness, and donating became a complete way of life for Galemo.

“Her house is always full of baskets of donations for others,” retired District 25 teacher, and Golden Apple recipient, Sharon Takahashi said. “Carol [Galemo] is a spark and the catalyst for our community.”

Galemo was nearly speechless while she reflected on the honor. It is clear, she is not used to, nor did she expect to ever be thanked in this manner. 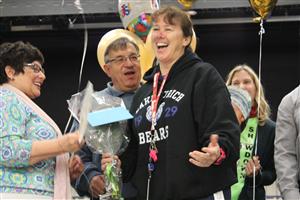 “I really like helping people that are less fortunate,” Galemo said. “When I lost my mother, I was even more motivated to answer the question, ‘how can I make this world a better place?’”

The ceremony for the Arlington Heights Hearts of Gold Awards will be held on February 20th.