Arlington Heights, IL – First and second grade students barely held back their excitement as they saw second grade teacher, Kristen Gattusso dressed head to toe in the complete outfit an Iditarod racer wears to sustain temperatures as low as 50 degrees below zero.

“It is so warm and heavy,” Gattusso said. “It was unimaginable in there. I had a hard time just moving and even hearing.”

It was all part of the show, however, as students spent the morning at Westgate learning Leader in Me habits and lessons from professional Iditarod racer, Pat Moon and his dog Hera.

Moon used stories from his difficult times during his races to describe how he uses Leader in Me habits such as Begin With the End in Mind, Put First Things First, Synergize, and Sharpen the Saw.

“Having a plan is very important,” Moon told the infatuated Westgate students as he described the habit, Begin With the End in Mind. “I need to know exactly which pocket or pouch every piece of equipment is that I may need. A few seconds could matter in freezing cold temperatures.”

Moon referred to the sixteen dogs on his team as his best friends many times throughout the presentation. He expressed the importance of working together with his friends to accomplish the goal of possibly winning the ten to fifteen day, over 100 mile race, across Alaska that ends just 35 miles from Russia.

“Sometimes I need to help our sled move faster using my foot,” Moon said as he demonstrated using his sled. “I need to also take great care of my friends [his dogs] like Hera over here by gathering and feeding them food they love, every time we break.” 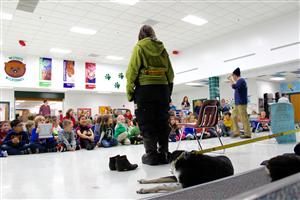 The students are studying the Iditarod race in class as a reference point for all other subjects and to further promote the Leader in Me habits that are so engrained in the Westgate community.

“The Iditarod begins this Saturday, so over the next couple weeks pairs of students are going to follow a musher,” Gattusso said. “We are also studying mapping and weather this year and that can all tie into knowledge from the Iditarod.”

Students learned how to research a topic using the Iditarod. In fact, prior to Moon and Hera’s visit the students put together many questions based off their initial research so they can better understand the context to which their guests’ would be talking from.

During the presentation, students soaked up every word of Moon’s.

“When racing, I need to begin with the end in mind,” Moon said, referencing yet another Leader in Me habit. “I need to have a plan, know where all stuff is and prepare for anything that can happen.”

Once Moon was finished, the students were given the option to meet and pet Hera, and this was something most students were very excited to do.