Music takes Westgate around the world

Arlington Heights, IL – One could feel and literally hear the excitement oozing from Westgate Elementary at 1 pm on Thursday, March 31.

The students were not at recess, or gym, and this wasn’t a free day. In fact, they were all gathered in the commons, with their attention forward.

The band String Fusion was center stage in front of a packed crowd of over 600 Wolverine students, blasting engaging, fun, and energetic music from all over the world.

“I am playing a fiddle,” band front man and Westgate parent Gabriel Edgar said. “This instrument is, however, considered and used in many ways by many different cultures. It’s not always called a fiddle.”

Students also learned about the Indian drums, which belonged to a member of the band. String Fusion is made up of five members, all who bring their unique cultural influences to the group, and to students and schools. 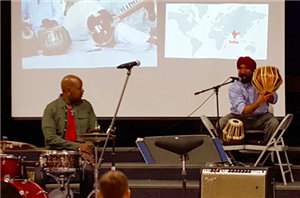 Westgate’s PTA Multicultural Committee helped organize this two-concert event for the Westgate students to introduce them to different types of music, generating a sense of culture and enlightenment. Not before long, it was a cultural and educational party in the Westgate commons.

Students couldn’t help but dance and groove to the music as the band used their instruments to sail, fly, drive and even teleport around the world. The main instruments never changed as String Fusion used the violin/fiddle, the base guitar, the lead guitar, the drums and the Indian drums in different ways to create music from all different cultures, while still teaching these enthusiastic students about the world of music.

“We are going to take our boat and go from Europe and head to America, but just like Columbus, we made a stop in the Caribbean for some Salsa music,” Edgar said.

By that time, even the staff was into the groove. One Westgate teacher was up and smiling and dancing to the music as the students took in the information and music. It was on to New Orleans and Jazz music, which opened the student’s eyes to the culturally diverse musical scene right here in America.