Thomas and Windsor show off their brand new spaces!

The new spaces at Thomas Middle School and Windsor Elementary School hosted their first students ever on Monday, August 28, and there were smiles across the board!

Below are two videos taken on the first day of school, detailing some fun aspects of the expansion projects at both schools. You can also scroll and find pictures of the new spaces.

The Thomas expansion project went super smoothly. The addition of 7 new classrooms (including a band room, music room and drama room), a new gymnasium, a new front entrance and an expanded commons area were all available for full use when the students stepped foot into Thomas on Monday.

The building is brighter as more natural light can now find its way down the hall ways and into different rooms.

A BIG thank you to the TMS staff, students, parents and surrounding community for their patience and support. Arlington Heights has provided its youth with an inspiring space to learn and grow in.

Despite a tight timeline of just over five months (this project broke ground in late March of 2017) the Windsor project was completed on time and on budget, and because of this, the students were able to get in and explore their new spaces on the first day of school.

This project added onto/doubled the size of their gymnasium, it added a new wing to the building that houses five new classrooms and new meeting spaces for staff, and it expanded the commons/lunch area to comfortably house a growing student body. The positive energy was flowing at an even greater rate than normal on the first day, and that is because of the dedicated and supportive Arlington Heights community that gave these Wildcats their new space.

A BIG thank you to the Windsor staff, students, parents and surrounding community for their patience and support. Arlington Heights has provided its youth yet another inspiring space to learn and grow in.

New band room at TMS - there is a new drama and music room as well. 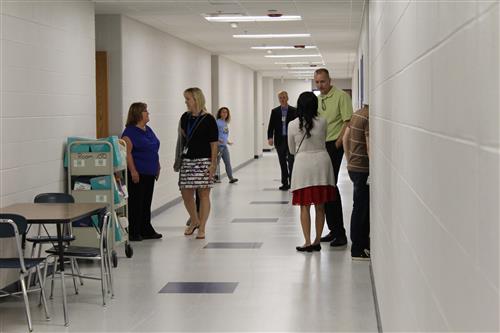